Over To You - Op-Ed
Food for thought

Over To You - Columns
Showcase: This King George V student is on a mission to empower women and break the poverty cycle in Nepal

News - Features
Below the Hong Kong poverty line: here’s what I learned from spending HK$315 on food for a week

Cyril Ip
Opinion: The racialisation of the coronavirus is putting Chinese diasporas in danger

Joyee Au Yeung
Letters from the dorm: University is the perfect time to learn how to 'adult'

Belinda Ng
Opinion: Don’t give up on civic education

Coronavirus cake, anyone? Italians fight fear with silliness as cases jump to 888, including 21 deaths

Peace deal is a leap of faith for the US, but one day the Taliban may win a Nobel Peace Prize

One fifth of Hong Kong's population is living below the poverty line, with some forced to live in illegal cubicle homes like these ones in Kwun Tong.
Photo: Dickson Lee/SCMP

More than 1.37 million people in Hong Kong are living below the poverty line, surviving on as little as HK$4,000 a month, according to official figures released on Monday.

A fifth of the population is classed as living in poverty - the highest figure in seven years - while 17.5 per cent of children are impoverished, despite government intervention.

But despite another record figure for the second year running, Chief Secretary Matthew Cheung Kin-chung denied claims the government was not doing enough. He said the high numbers were due to an ageing population, an improving economy, and changing demographics. 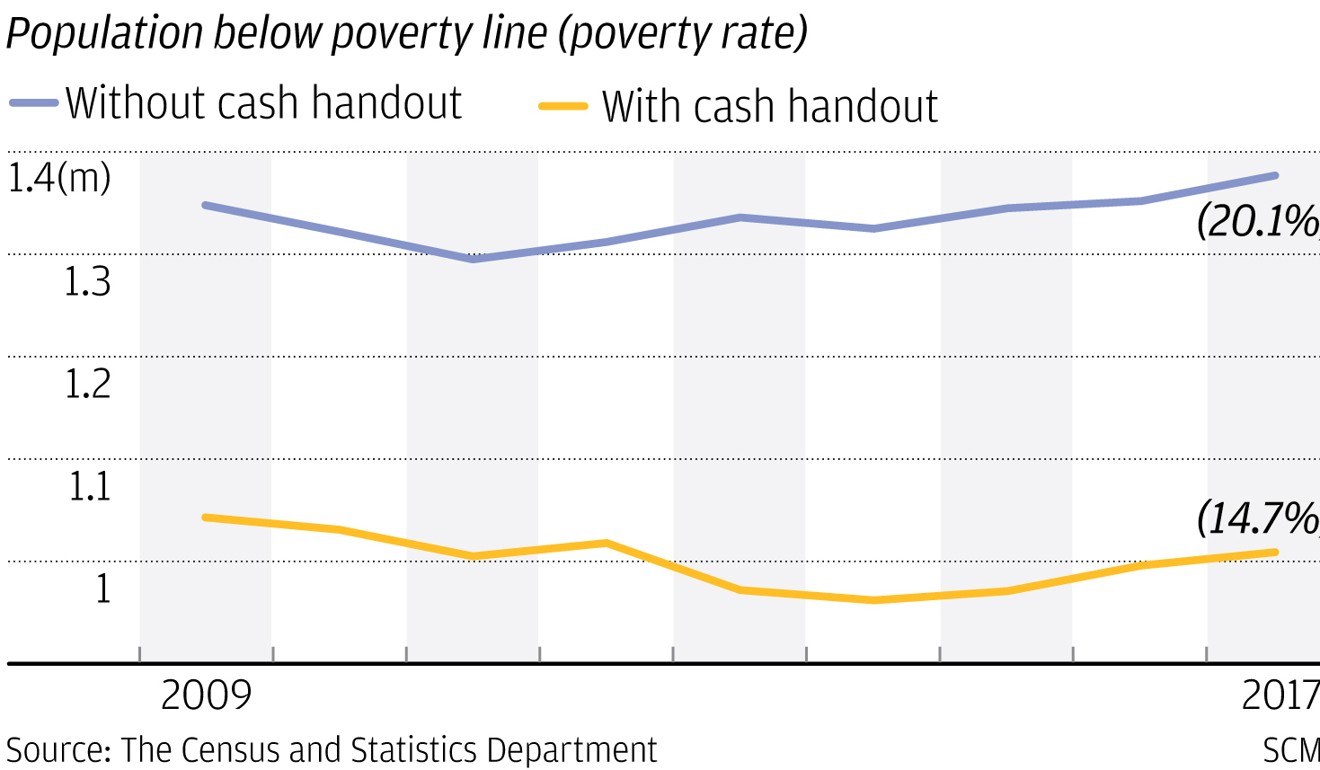 The poverty line is calculated by halving the median monthly household income before taxation and government handouts, which include social welfare payments, such as allowances for the elderly and low-income families.

According to the Hong Kong Poverty Situation report for 2017, 1.377 million residents were living below the official poverty line - 25,000 more than in 2016.

The poverty rate rose 0.2 percentage points to 20.1 per cent, which is the highest since 2010. But, after taking the government’s cash handouts into account, it fell to 14.7 per cent, or 1.01 million, a rate similar to the previous year.

“I don’t think our policies have failed at all,” said Cheung, who is also the chairman of the Commission on Poverty.

The chief secretary said the poverty rate after government intervention was similar to the previous year, but the number had simply increased because the population had grown.

Not enough food and no winter clothes: 90 per cent of HK primary school children on welfare are not having their basic needs met

Cheung said it was difficult to accurately calculate the figures, as government support such as public rental housing and health care vouchers for elderly were not reflected in the figure.

“As such, the poverty line threshold for different household sizes also went up,” he said.

The government the rise in poverty is due to Hong Kong's ageing population
Photo: C.Y. Cheng/ SCMP

But, Labour Party lawmaker Fernando Cheung Chiu-hung said the poverty figures were worrying given the city's growing economy. He said the situation could worsen if the economy took a downturn.

Meanwhile, Sze Lai-shan, who is on the government's Commission on Poverty, said Hong Kong's Comprehensive Social Support Scheme, which supports families in need, was outdated.
Life inside a 55 sq ft subdivided apartment - from a child's perspective

“Children now need computers to do school work; we cannot just use a scheme with adjustment criteria set more than 20 years ago,” said Sze.

Matthew Cheung said he believed the poverty situation would improve in the 2018 report thanks to changes made to the working family allowance scheme this year.

He said the money regularly spent on social welfare was expected to increase to HK$79.8 billion for the 2018-19 financial year. This is the second highest government expense, behind funding for education.

Young Post covers the latest news, views and stories on Hong Kong students, school life, sport and local education, as well as keeping tabs on what's hot and what's not.